Rusty Relics: The stories this old truck could tell 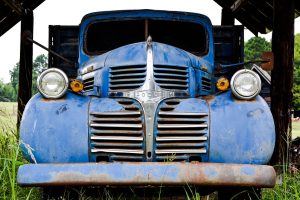 Like many other motorsports reporters, I’ve always been really tickled to get a really good quote. You never know when or where they will come.

One of my favorites came years ago when I was interviewing then-Penske Racing president Don Miller and his then-young driver Ryan Newman. We were tinkering with an old Plymouth when Newman’s wife Krissie stopped by the shop.

I asked her what she thought about her husband’s interest in cars that were on the road long before he was even born.

I feel like she could have been talking about me – and a lot of you reading this – although the numbers would be a little different.

Whenever I see Ryan at the track, we rarely talk about racing. It’s usually about old cars or trucks or tractors or farming.

One time at Daytona several years ago, I asked Ryan if he knew where I could get a decent six-cylinder Dodge engine to go in a 1946 truck I was working on.

Turns out it was the engine out of the 1953 Plymouth Cranbrook he drove while he was in college at Purdue and later when he was starting his NASCAR career. His dad Greg had put a later V-8 in the Cranbrook, and the six-banger was just sitting in his shop.

I drove up to his farm north of Charlotte one day, and we spent hours looking at tractors, trucks, critters and even a few old race cars.

As we were loading the engine into the bed of my little Ranger, Ryan was going to let me take an engine stand with me. I told him I’d brought an old tire for the engine to sit on, so we lowered the engine onto the tire only to see the better part of six quarts of expensive racing oil pouring out into the bed.

We sopped up as much as we could, but oil was everywhere, including on the fancy pavers in the drive between Ryan’s house and the shop.

I dripped oil all the way up Ryan’s driveway and most of the way back to Fayetteville. Thankfully, we both can laugh about that.

The engine is now in the old Dodge. The story of how we got it back together is a blog for another day.