Rusty Relics: The old ride gets a new ticker 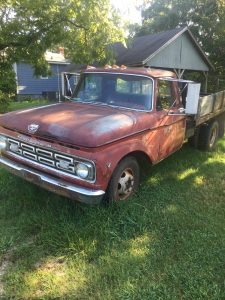 Back in the day, one of my favorite cousins, the late Weldon Stubbs, was well known in these parts for his slow driving.

He rarely drove over 45 or 50 miles per hour, and even though there was a lot less traffic back then, he could stack up some cars behind him on a trip down Highway 92 from Fayetteville to his home in Woolsey.

Nowadays, when I look in the mirror when I turn off 92 onto Hill’s Bridge Road and see a line of cars behind me, I realize I’ve become the Weldon Stubbs of my day.

Sometimes I tell myself that I drive slow because my old cars and trucks don’t need to be run as hard as it takes to set a modern pace. Mostly, it’s just because I don’t feel like rushing through life and I enjoy a leisurely drive.

But it is nice to have an old truck that can keep up with modern traffic.

We have a 1964 Ford F350 that has a rear-end gear that lets the truck run fast enough to keep me from being a hazard on the highway, most of the time anyway.

Several years ago, Joanne and I were on a Sunday drive, and I was running that old truck pretty hard to stay ahead of a line of traffic. Just as I let off the gas entering the town of Woolsey, the tired old engine let go.

A rod went through the block and it scattered parts and oil on the highway.

We trailered it home and put a 360-cubic-inch engine out of a 1967 Ford in it. That’s not as simple as putting a 350 Chevy engine in any vehicle. Ford engine swaps never are.

Nothing seemed to interchange. We had to change all kinds of parts – engine mounts, water pump, fan, flywheel and a several other pieces to get it back going.

We never started the replacement engine until it was in the truck, and when we fired it up, one lifter was ticking.

I hoped it would eventually quiet itself, but it didn’t.

We drove the truck for years, and the noise aggravated me every time I cranked it.

A few weeks ago, Stephanie made a trip in that truck and came home saying it wasn’t running good and had little power.

I was surprised because even with the lifter noise that engine usually ran OK and had plenty of pep.

I cranked it up and it was skipping and popping back through the carburetor.

I began pulling spark plug wires off one at a time and found that the skipping cylinders were the back two on the left back.

I removed the valve cover and was shocked – and relieved – to see that three of the four bolts holding the rocker shaft to the cylinder head had backed off.

I tightened them up, fired up the engine and it ran better than it ever had since it was in the truck. And the lifter noise was gone.

I was telling my old iron friend Ryan Newman about it, and about how glad I was to get it fixed without spending any money.

Knowing the cheapskate I am, his response was: “I’ll bet you didn’t even put a new valve-cover gasket on it.”

Ryan was right. Even though he has some really nice pieces in his collection, he’s got a little cheapskate in him too, so we have that in common.

We’ll have that 64 Ford and the rest of our Rusty Relic truck collection on display at the 22nd annual Inman Farm Heritage Days on Sept. 21-23.