Rusty Relics: Old-fashion hearts are both young and old 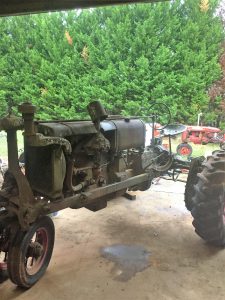 We were talking about the state of the old car/old truck/old tractor hobby and he said that when he first got involved about 40 years ago he was one of the younger members of the group. And all these years later he still is.

I got to thinking about that, and I sometimes feel the same way myself.

Then I got to thinking about Daniel Moss, a 20-year-old Allis Chalmers enthusiast from Brooks, Ga.

He and his family are big supporters of Inman Farm Heritage Days, and their enthusiasm has been rubbing off on me lately.

When they were loading their tractors after the show this year, Daniel and his dad Kevin helped me drag some of my tractors out of the woods where they’ve been sitting for years and take them to the barn where I could work on them.

Some of them have been sitting basically untouched since around 2005, when my projects were temporarily derailed by a health scare (a TIA) and the loss of my full-time, benefits-paying newspaper job.

But once I got started back on those projects, I’m raring to go again.

There’s a Farmall Super C that we dragged in from north Georgia several years ago back up and running, and running good.

We took some wheels and a distributor off one Farmall H, put it on another and drove it out of the barn where it had been sitting for at least 10 years. Some minor repair got a Farmall Super M back going after a similarly long layoff, although it still needs a good cleaning of the gas tank.

We have a WC Allis Chalmers almost ready to go again after changing out a sleeve and piston ruined when water rained in the exhaust, doing a valve job and replacing the gas tank.

On Sunday, Joanne and I pushed an old F-30 Farmall into the barn, where we’ll tear into it and see what it needs to go again.

I’m grateful to Daniel and Kevin Moss for getting me going again on my projects, and I was pleasantly surprised to find that not only can enthusiasm for old iron be spread up to us older folks, it also can be spread to the younger set.

My eight-year-old granddaughter Abigail had a school assignment in which she had to write a letter to her future self.

She wrote that she wanted to be a farmer because she loved animals, enjoyed growing and selling vegetables and “because you have old-fashioned trucks and old-fashioned tractors.”